In the good old days when babies wore gowns, things were relatively simple. Nowadays as with everything else, we are spoilt for choice or is it the choice that has spoilt things ?/p>http://www.babanbaby.com/first-needs/clothing/top-string-jablas-plain-white-0-4-months

Today you can dress a newborn in a traditional gown with tie ups or snaps. The best garment for a newborn will be the all in one or onesie or baby gro as it was called in my time. I find that the best onesies are literally all in one with a flap over so that the baby’s chest is properly covered. Out of all onesies Keshav wore, the European ones were the best. You literally had to place the baby flat on the garment, slip the arms into the sleeves and fold over the rest to snap into place.
http://www.babanbaby.com/first-needs/clothing/top-string-jablas-plain-white-0-4-months

END_OF_DOCUMENT_TOKEN_TO_BE_REPLACED

That’s when your baby is ready to eat even when he’s not 6 months old.

Neesha is one of those new age moms who insist on nursing their children exclusively for the first six months. When his throat was parched and his lips dry with the heat, I hesitantly asked her if I could wet his lips with a wet cloth. She looked askance and said ” Don’t talk rubbish! He is not supposed to drink water!”

I was equally aghast as I distinctly remember giving her water, gripe water and even a top up with a formula before she was 12 weeks old. In fact I couldn’t wait for twelve weeks to get over before I could get her onto something more wholesome than milk and was really excited to get her into taking solid food. But things have changed today. Nowadays mothers are advised to nurse the child exclusively for 6 months which is a whole 24 weeks or 28+ weeks if you go by the date the baby was born.

END_OF_DOCUMENT_TOKEN_TO_BE_REPLACED

Since when have grannies stopped using notebooks and pencils to make notes?

Since when have grannies stopped writing long, advisory letters to their grandchildren?

A long long time ago!

People of my generation gladly abandoned the typewriter of our parents and embraced the keyboard and all its touchboard advantages. With iPads and iPhones taking technology even further and simpler to use, we’ve adapted to that system too? So for all those young ones who think they’ve invented WhatsApp? they’d better start thinking again.

These days with so many grandparents being tech savvy, grandchildren will be surprised to get a WhatsApp message from their grandparents. When did that old bird learn how to type so fast? Indeed, the little ones forget that  Whats App was not invented by them or their generation, computers have been around for a long while now.In fact, there is a pair of grandparents in America ( where else?? and Denver Co, to be more precise) who have invented an application that helps them keep in touch with their grandchildren and family scattered all over the place. Fam Zoom which is a downloadable application helps you do puzzles with your grandkids at the exact same time that they’re doing it!! This sounds simply amazing and while I haven’t tried it since Keshav is too small ( he’s just about started holding his head), I’m dying to try it out when he gets bigger.

Truly with the amazing revolution in the virtual world, grandparents can get closer to their grandchildren in the medium that they are familiar with. Despite the spectacles they can’t find, the fingers that don’t move as fast and  the decibels they can’t hear, computers have truly changed the way people communicate and keep in touch. How thrilling it is for a grandparent seven seas away to see a child’s first birthday party in action? And through Facebook and Twitter they can even find out what their friends are up to, see photographs the moment they are uploaded and generally be literally a click away.

So for your grannies and grandpas ( more likely great grandparents) who are unfamiliar with the new technology, just go for it and shock your grandchild with a WhatsApp? Flood his email inbox with silly forwards that he never knew existed and wish him a Happy Birthday on his Facebook wall. If that doesn’t grab his attention nothing will!

In my last post I mentioned that young couples, particularly young mothers, should not give up their pre-infant lives. While it is important to maintain a baby’s schedule, it is equally possible to have some kind of a social life. In India especially in this season of festivity, young mothers are often invited to family dos or other social events. Very often , unsure of how the baby will react , many mothers prefer not to go or to go without the baby if possible. So does it mean that you should lead a secluded life for the first six months of your infant’s life? Of course not. But also it is equally important to remember that large social gatherings are also good breeding grounds for infections like coughs and colds that are doing the rounds these days. Plus an infant attracts attention like no other and there are many hands that are willing to grab him and pass him around  like a parcel and it becomes difficult to say NO without seeming like a stuck up B*****.

While it makes sense to stay away from crowds and indoors in the first forty days after your delivery, a time comes when you need to get out : mainly to maintain your own sanity. But you should take care while going out that :

But it is not always possible for baby to be left at home unless you have a regular ayah or nurse to look after the child. So what do you do then?

To entertain or not that is the question that many a young couple faces these days.

Louis Vuitton, the master luggage craftsman, has unfortunately not devised a system where a baby could just be packed up and taken for a journey! If this were the case, it would be all too simple. 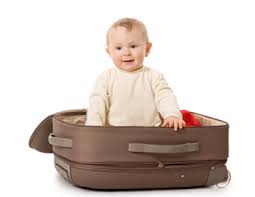 However, travelling with a baby , though daunting, is not impossible , especially since most babies have already had their first outing to the post-natal clinic or the paediatrician‘s  by the age of 1 week!!! END_OF_DOCUMENT_TOKEN_TO_BE_REPLACED

It’s been a long while since I’ve posted on this site . Well, like most things in my life, I got too caught up with living itself to spend time writing. When you’re busy helping raise  an infant, albeit as a grandmother, you find things spinning out of control and before you know it, you have no time at all to do the things you want to do. Perhaps that is what is called living in the moment – the absolute immediate moment that requires all your attention – such as

END_OF_DOCUMENT_TOKEN_TO_BE_REPLACED

Well, it’s been 16 weeks now since Keshav came into our lives and a fortnight since I last blogged about my Granny days.This is mainly because we’ve been dealing with the circadian rhythms of Keshav which has totally messed with ours. All studies say that infants start sleeping well the minute they turn 12 weeks old. Obviously their studies did not include Keshav because he wasn’t born yet! After dealing with a harrowing 6th week of screaming because of the tummy monster, the agonising pains of growing up in the eighth week ,we were looking forward to cruising along the nights from the twelfth week on. END_OF_DOCUMENT_TOKEN_TO_BE_REPLACED

I’ve been pretty quiet these past few days largely because we’ve been having a trying time with Keshav and his gas. Mother’s milk, while it is the best for a baby is also one of the reasons for a testy baby. Neesha was all set to nurse her baby for all of six months because the latest WHO reports show that babies who are exclusively breast fed have the best start in life. In countries like ours where runny tummys are quite the norm, breast feeding is the best way to avoid water borne diseases and the consequent risks of diarrhea, the number two culprit for infant mortality in tropical countries. But what people don’t tell you is that mother’s milk sweet as it is also causes a lot of gas and constant pain. END_OF_DOCUMENT_TOKEN_TO_BE_REPLACED One question you will hear time and again is

When your little munchkins is red in the face, wriggling and writhing, his face scrunched up and  mouth wide open to let out the loudest wail , this is the last question you’d ever want to hear! Especially when you don’t have the answer yourself. But, you will hear it again and again and again till you  feel like joining baby in sheer helplessness! But fear not. Babies don’t cry for no reason. END_OF_DOCUMENT_TOKEN_TO_BE_REPLACED

That is the question that has plagued all mothers and pediatricians alike. When I was a mother it was the rage to put the baby on solid food as soon as possible. As long as we breast fed the baby for 12 weeks it was fine. We were not only encouraged to give formula feeds from day 1 but were also encouraged to give water, gripe water and vitamin drops.

Thirty years on and I find all that’s changed. Mothers today are encouraged to breast feed exclusively for 6 months. This is supposed to give the child a life long immunity against obesity and asthma and other allergy induced  conditions. So Neesha has decided to exclusively feed little Keshav. But it’s not as easy as it looks find out more on this link

p.s. the picture is not mine. I’ve taken it from the net.

Nappy Tales
Create a free website or blog at WordPress.com.